Below are images all Mormons are very familiar with as they are displayed as paintings in meeting houses or on the cover of the Ensign magazine. What is important is how they show Joseph Smith concentrating hard and running his fingers over the golden plates translating each symbol as Oliver Cowdery transcribes what would become the Book of Mormon. This is how the Church has always led its members to believe how the Book of Mormon was translated, by the power of God through the Urim and Thummim.

However, would you feel betrayed and lied to if this is not how the Book of Mormon actually was translated? If you can recall the story of the translation, the first 116 pages of the Book of Mormon were allegedly translated using the Urim and Thummim. Martin Harris then proceeded to loose the 116 pages, so the custodial angel then took the Urim and Thummim away from Joseph Smith. Here is where the obfuscation of the Church comes into play. Given the bizarre nature of the real translation method, it is rarely talked about and even more rarely published in church materials, but you can find it if you look hard enough.

Since Joseph had to start over on the translation, he began using a seer stone he had found years prior while digging a well. This is the same seer stone he used to find buried treasure as a "money-digger" when he was hired by Josiah Stowell. This was also the reason he was arrested for the illegal practice of "glass-looking" in deceiving the same Josiah Stowell who was paying Joseph Smith $14 per month to search for buried treasure. Joseph was ordered to pay a court fine for this arrest. Below is the actual court record showing this incident.

Before this court record was discovered in 1971, BYU teacher and LDS author Dr. Francis W. Kirkham boldly stated if this 1826 trial were true, Mormonism would be a fraud: "If any evidence had been in existence that Joseph Smith had used a seer stone for fraud and deception, and especially had be made this confession in a court of law as early as 1826, or four years before the Book of Mormon was printed, and this confession was in a court record, it would have been impossible for him to have [legitimately] organized the restored Church." (A New Witness For Christ In America, vol. 1, pp. 385-87)

The real translation method of the Book of Mormon can be found in a July 1993 Ensign article (p. 61) by Apostle Russell M. Nelson in which he stated, "The details of this miraculous method of translation are still not fully known. Yet we do have a few precious insights. David Whitmer wrote:

'Joseph Smith would put the seer stone into a hat, and put his face in the hat, drawing it closely around his face to exclude the light; and in the darkness the spiritual light would shine. A piece of something resembling parchment would appear, and on that appeared the writing. One character at a time would appear, and under it was the interpretation in English. Brother Joseph would read off the English to Oliver Cowdery, who was his principal scribe, and when it was written down and repeated to Brother Joseph to see if it was correct, then it would disappear, and another character with the interpretation would appear. Thus the Book of Mormon was translated by the gift and power of God, and not by any power of man.' (David Whitmer, An Address to All Believers in Christ, Richmond, Mo.: n.p., 1887, p. 12.)"  This translation method was confirmed by others such as Emma Smith, William Smith and Martin Harris as well.

So the pictures and stories which have been presented by the Mormon church regarding the Book of Mormon translation method are misleading at best and lying at worst. So, if the translation method of the single most important evidence of the Mormon faith is something the leaders of the church are being dishonest about, what else are they being deceitful about? 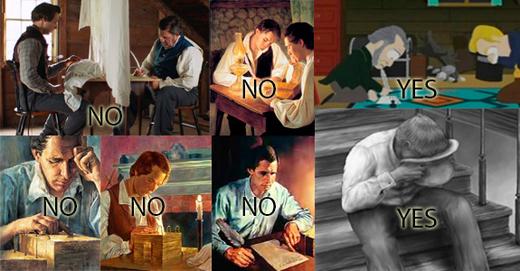 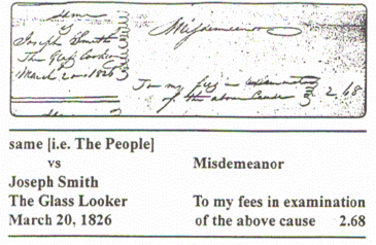