The restoration of these two priesthoods is discussed in the Joseph Smith History 1:65-72 and the Doctrine and Covenants sections 13 and 27:12-13.

Here I will lay out several of the historical issues with the restoration of the two priesthoods.

1.  There is no verbal record to membership or written record of the appearances of John the Baptist, Peter, James and John in connection to the restoration of the priesthood prior to 1834.  This is five years after the alleged incidents took place.

The Book of Commandments was compiled in 1833 and was eventually changed to become the Doctrine and Covenants in 1835.  Interestingly, the appearances of John the Baptist, Peter, James, and John are completely absent from the 1833 Book of Commandments.  On top of no documented First Vision account, why would two other foundational events which allegedly took place four years prior in Mormon history be missing from the document where they now reside today?  Please see the comparison of the Book of Commandments chapter 28 versus the Doctrine and Covenants section 27.  As you can see, hundreds of words were added to the 1835 edition from the 1833 edition.  This is a common occurrence throughout a comparison of the two versions.

MormonThink has the following quotes regarding the altering of the revelations from the Book of Commandments:

"The revelations in the Book of Commandments up to June, 1829, were given through the ‘stone,’ through which the Book of Mormon was translated . . . [The] revelations … were printed in the Book of Commandments correctly… just exactly as they were arranged by Brother Joseph and the others. And when the Book of Commandments was printed, Joseph and the church received it as being printed correctly . . . When it became generally known that these important changes had been made in the Book of Doctrine and Covenants, many of the brethren objected seriously to it, but they did not want to say much for the sake of peace, as it was Brother Joseph and the leaders who did it. The majority of the members – poor weak souls – thought that anything Brother Joseph would do must be all right; so in their blindness of heart, trusting in an arm of flesh, they looked over it and were led into error" (David Whitmer, An Address to All Believers in Christ, 1887, page 53, 56, 61).

"Is it possible that the minds of men can be so blinded as to believe that God would give these revelations – command them to print them in His Book of Commandments – and then afterwards command them to change and add to them some words which change the meaning entirely? As if God had changed his mind entirely after giving his word? Is it possible that man who pretends to any spirituality would believe that God would work in such a manner?" (David Whitmer, Saint’s Herald, February 5th, 1887)

"In some instances, when a new revelation changed or updated what had previously been received, the Prophet edited the earlier written revelation to reflect the new understanding. Thus, as his doctrinal knowledge clarified and expanded, so did the recorded revelations. They were characterized by the changing nature of his understanding of the sacred subject matter. The Prophet did not believe that revelations, once recorded, could not be changed by further revelation" (Marlin K. Jensen, The Joseph Smith Papers: The Manuscript Revelation Books, Ensign, July 2009).

"He revised his own revelations, adding new material and splicing one to another, altering the wording as he saw fit. He felt authorized to expand the revelations as his understanding expanded...Joseph once said that Methodists 'have creeds which a man must believe or be kicked out of the church. I want the liberty to believe as I please, it feels so good not to be trammeled. 'Revelation meant freedom to Joseph, freedom to expand his mind through time and space, seeking truth wherever it might be...The balance between freedom and control makes it difficult to keep Mormonism in focus. Was it authoritarian or anarchic, disciplined or unbound? The printed word of God constituted a doctrinal authority that at the same time was open-ended, allowing visionary freedom to Joseph's successors after his death" ([LDS Author] Richard Bushman, Rough Stone Rolling, 285).

The Book of Commandments and Doctrine and Covenants both make it very clear that no "Priesthood" ordination was required to serve and be called to the work of God.  Chapter 3 (Section 4 today) says, "If ye have desires to serve God, ye are called to the work ... and faith, hope, charity, and love, with an eye single to the glory of God, qualifies him for the work."

Historian and former BYU professor D. Michael Quinn said the following on this issue, "According to current tradition, both the Aaronic and Melchizedek priesthoods functioned in the church after the spring of 1829 when Smith and Cowdery were visited first by John the Baptist, who restored the lesser or Aaronic priesthood, and then by Peter, James, and John, who restored the higher or Melchizedek priesthood. A closer look at contemporary records indicates that men were first ordained to the higher priesthood over a year after the church's founding. No mention of angelic ordinations can be found in original documents until 1834-35. Thereafter accounts of the visit of Peter, James, and John by Cowdery and Smith remained vague and contradictory" (The Mormon Hierarchy: Origins of Power, D. Michael Quinn, pp. 14-15, 1994, Signature Books).

3.  Why is the date of the Melchizedek Priesthood restoration unknown?  Assuming it was an actual event, this is one of the most important events in LDS church history which should have been extremely well documented.

B.H. Roberts, a lifelong member of the LDS church and church historian, added the following footnote regarding the restoration of the Melchizedek Priesthood: "... there is no definite account of the [Melchizedek Priesthood restoration] event in the history of the Prophet Joseph, or, for matter of that, in any of our annals, the evidences of the fact of their ordination to the higher or Melchizedek Priesthood promised them by John the Baptist are presented now, together with a consideration of the place where, and the time when the great event occurred." (B.H. Roberts, History of the Church, Vol. 1, p.40 footnote)

4.  Why did Oliver Cowdery forget who and how many were there to confer the Melchizedek Priesthood to Joseph Smith and himself?

Oliver Cowdery gave a public testimony of the event when he returned to the church in 1848.  Bishop Reuben Miller, who was present at the testimony, recorded the following statement from Oliver Cowdery, "I was also present with Joseph when the higher or Melchizedek Priesthood was conferred by the holy angel on high. This Priesthood, we then conferred on each other by the will and commandment of God." (B.H. Roberts by recorded statement of Bishop Reuben Miller, History of the Church, Vol. 1, p.41 footnote) (bold mine).  This recorded statement by Reuben Miller was also published in the April 13, 1859 edition of the Deseret News.

5.  Why do other LDS historical records show the initial conferral of the Melchizedek Priesthood occurred in Ohio at the meeting of elders in early June of 1831?

LDS member, historian and author Richard L. Bushman wrote the following regarding this meeting, "In early June, forty-four elders, four priests, and fifteen teachers met ... for a spiritual endowment. ... During the turbulent meeting, Joseph ordained five men to the high priesthood, and Lyman Wright ordained eighteen others, including Joseph. ... before 1831 men were called to church offices—elders, priests, and teachers—given authority, and licensed without reference to a bestowal of priesthood"  (Richard L. Bushman, Rough Stone Rolling,  pp. 156-158).  This book can be purchased online at www.desertbook.com.

So, pro-LDS author Richard Bushman documents Joseph Smith was ordained to the high priesthood in early June of 1831 by Lyman Wright.  Why would Joseph Smith feel the need to have the Melchizedek Priesthood conferred upon him again if he already received it two years earlier by Peter, James and John?  Bushman also acknowledges that prior to 1831, they had church offices of elders priests and teachers with authority absent any priesthood.

Other accounts of this meeting of elders are documented as well as shown in the statements below:

"On the 3rd of June, the Elders from the various parts of the country where they were laboring, came in. … the authority of the Melchizedek Priesthood was manifested and conferred for the first time upon several of the Elders” (History of the Church, vol. 1, pp. 175-176).

All the documented evidence points to the two priesthoods being something which was created well after the church was already established and not in 1829 as the church claims.  For more detailed issues and documentation surrounding the priesthood restoration accounts please visit UTLM.org or MormonThink.com. 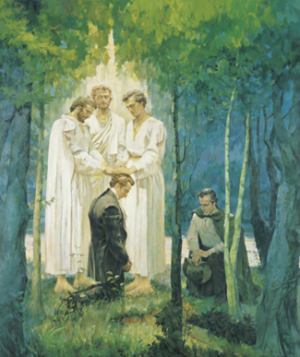 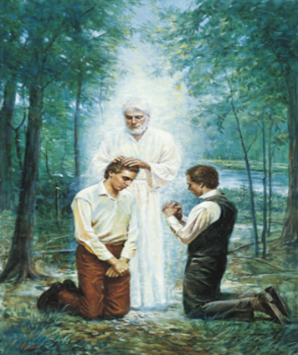