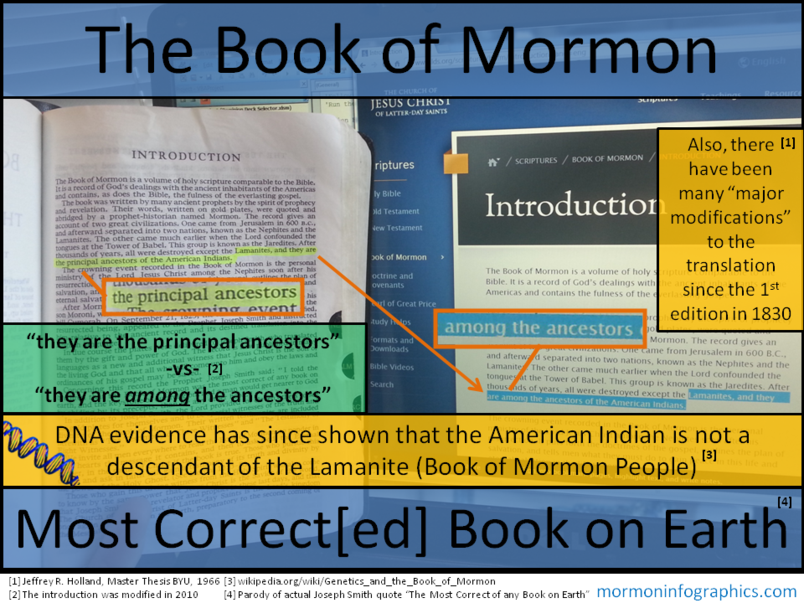 Joseph Smith said in the introduction to the Book of Mormon, "I told the brethren that the Book of Mormon was the most correct of any book on earth, and the keystone of our religion, and a man would get nearer to God by abiding by its precepts, than by any other book."

Joseph Smith also said a voice from heaven said the translation was correct, ". . . we heard a voice from out of the bright light above us, saying, 'These plates have been revealed by the power of God, and they have been translated by the power of God. The translation of them which you have seen is correct, and I command you to bear record of what you now see and hear'" (Joseph Smith, History of the Church, Vol. 1, pg. 54-55).

Statements like these should lead you to believe there should be no issues warranting change with the Book of Mormon. However, this is not the case as there have been more than 4,000 changes to the Book of Mormon, many of which are material such as changing the character of God.

I will walk you through some of the more significant changes from the original 1830 Book of Mormon which cast doubt as to whether this book is truly inspired of God.

Change to the Introduction

The 2006 introduction to the Book of Mormon reads: "After thousands of years, all were destroyed except the Lamanites, and they are the principal ancestors of the American Indians." (emphasis added)

This statement in the current version of the Book of Mormon now reads, "After thousands of years, all were destroyed except the Lamanites, and they are among the ancestors of the American Indians." (emphasis added)

This change may not seem like much, but there is a big difference between "principal" and "among."  The reason for this change is because DNA testing has been done on more than 150 Indian tribes from North, Central and South America to test the claims of the Book of Mormon.  Of the tens of thousands of tests performed, 99.4% have DNA that shows American Indians are descended from east Asia.  This is further supported by huge amounts of archaeological, anthropological, and linguistic evidence the ancestors of these American Indians migrated from east Asia via the Bering Sea Straits over 10,000 years ago.

The other 0.6% of those tested were shown to have descended from Europe, which would have occurred after Columbus came to discover the American continent in 1492.

This is the same DNA testing which is admissible in the court of law and has led to the conviction (and release for prior convictions) of thousands.

In 2002, Gordon B. Hinckley was posed a question regarding this issue during an interview with ZDF German Television:

"Nemetschek: Now, Mr. President, one question which is a little bit complicated for me to understand, but I heard it and one colleague asked me to ask you. What will be your position when DNA analysis shows that in history there never had been an immigration from Israel to North America? Could it be that scientists will find out?

Hinckley: It hasn't happened. That hasn't been determined yet. All I can say is that's speculative. No one really knows that, the answer to that. Not at this point." (Gordon B. Hinckley Interview, ZDF German Television, Salt Lake City, Utah, January 29, 2002, Conducted by Helmut Nemetschek)

Hinckley tries to dismiss scientific proof American Indians are not descendants of Israel by stating DNA testing is "speculative."  It looks to me as if comments like these by the prophet of the church were just to buy time so they could figure out a way to introduce change and develop a story that answers this massive DNA issue staring them straight in the face.  By 2006, they had figured out a way to change the scriptures and develop responses that attempt to reflect this damning proof.  It is obvious this change made in 2006 was not mentioned until 2013 so it could be buried in with the hundreds of other changes made at this time to keep the spotlight off this major change.

These changes reflect Joseph Smith's evolving view of God which began around 1834-35 when he went from a monotheistic trinitarian view of God to a polytheistic tritheism view of deity. Further supporting this evolution are many documents and accounts I will briefly discuss below.

Joseph Smith's handwritten first vision account from 1832, which states he was only visited by the Jesus, not God and Jesus.  The handwritten version can be read from the December 1994 Ensign.

The Lectures on Faith, which were removed from the Doctrine and Covenants in 1921, proclaim these attributes about God:  a God who is a personage of spirit (not of flesh and bones) who is everlasting, a God who does not change character (so he never evolved from a man to become God), a trinitarian view of God the Father, Jesus Christ, and the Holy Spirit in one being, and the Father and the Son being one with the Son being called the Son because of the flesh.  (Doctrine and Covenants, Lectures on Faith, 1835, pp. 51,53-54, 57-58)

KJV:
"All things are delivered to me of my Father: and no man knoweth who the Son is, but the Father; and who the Father is, but the Son, and he to whom the Son will reveal him."

Inspired Version:
"All things are delivered to me of my Father; and no man knoweth that the Son is the Father, and the Father is the Son, but him to whom the Son will reveal it." (emphasis added)

By 1835, Joseph Smith began to change his views on God and the godhood.  In his King Follett Discourse show in the April 1971 Ensign magazine, he makes the following statements:

"It is the first principle of the gospel to know for a certainty the character of God, and to know that we may converse with Him as one man converses with another, and that He was once a man like us; yea, that God himself, the Father of us all, dwelt on an earth, the same as Jesus Christ Himself did; and I will show it from the Bible."

"God himself was once as we are now, and is an exalted man, and sits enthroned in yonder heavens!"

"I am going to tell you how God came to be God. We have imagined and supposed that God was God from all eternity. I will refute that idea, and take away the veil, so that you may see."

If Joseph Smith were a true prophet, why would he be changing the nature and character of God so drastically after he supposedly had already seen God the Father and Jesus Christ in the First Vision?  Remember, God is not the author of confusion (1 Corinthians 14:33).

- 2 Nephi 30:6 "And then shall they rejoice; for they shall know that it is a blessing unto them from the hand of God; and their scales of darkness shall begin to fall from their eyes; and many generations shall not pass away among them, save they shall be a pure and delightsome people."

The church must have realized God must have been having a lot of "off" days with the number of large errors which have had to been corrected from the original 1830 Book of Mormon.  Another major correction occurred in Mosiah 21:28.

This is important because King Mosiah was already dead in Mosiah 6:5.  I though this was the most correct book on earth?

The title page of the Book of Mormon has had a major revision as well.  It seems there was confusion as to whether Joseph Smith was the author of the book or the translator of the book.

Recent Book of Mormon:
"Translated by Joseph Smith, Jun." (emphasis added).  The testimony of the eight witnesses also was changed to translator, from author and proprietor.

There has also been more than 4,000 other changes to the Book of Mormon from the original 1830 edition.  Most of these changes are minor (poor spelling and grammatical errors), but would the Lord really tell Joseph and the witnesses the translation is correct if there were significant changes necessary as well as over 4,000 more grammatical and spelling changes still to be made?  What was Joseph Smith thinking when he declared it to be the most correct book on earth?