The Doctrine and Covenants

To quote the author(s) of MormonThink.com, "You would think that with all the dilemmas facing our modern world, we would need divine guidance on issues like stem-cell research, homosexuality, cloning organs, etc."

The pre-1979 edition of the Doctrine and Covenants had this to say about the angel Moroni in the introduction: "...Joseph Smith received visitations from Moroni, an angel of light..." (emphasis added).  This description of Moroni as an “angel of light” has since been deleted.  Why?  Well let’s see what the bible has to say about “angels of light.”

2 Corinthians 11:14-15 states, “And no marvel; for Satan himself is transformed into an angel of light. Therefore [it is] no great thing if his ministers also be transformed as the ministers of righteousness; whose end shall be according to their works.”

So according to the Bible and Bruce McConkie’s book, Mormon Doctrine, the angel of light is the Devil.  Could this be truly inspired writing of God if for years Moroni is given the same title as the Devil?  It’s no wonder why the LDS church deleted this description of Moroni in 1979.

The Book of Commandments was published by the Church of Christ (yes, the Mormons are on their 3rd church name because evidently God kept changing His mind) in 1833 which contained the revelations of Joseph Smith.  In 1835, the Book of Commandments became the Doctrine and Covenants.  There are several issues as one studies the differences of the two editions.

First, there is nowhere to be found within its pages anything on several of the most important events in church history such as the First Vision, the coming forth of the Book of Mormon, the restoration of the priesthood or the testimonial accounts of the eleven witnesses.  Why have all these items been added at later times rather than at the most opportune time, the initial publication of the Book of Commandments?

Additionally, many of the revelations supposedly given by God contained in the Book of Commandments have been seriously altered, inflated or even deleted by the time they reach the Doctrine and Covenants.

The problem is magnified when you have LDS church prophets and apostles claiming there have been no changes at all to the supposed revelations from God.

“Within a few years after its organization, the Church had received practically all necessary supplementary laws and regulations. These also have remained unchanged. There has been no tampering with God's word....the whole body of Church laws forms a harmonious unit, which does not anywhere contradict itself nor has it been found necessary to alter any part of it" (Apostle John A. Widtsoe, Joseph Smith—Seeker After Truth, pp. 119-122).

“Inspiration is discovered in the fact that each part, as it was revealed, dovetailed perfectly with what had come before. There was no need for eliminating, changing, or adjusting any part to make it fit; but each new revelation on doctrine and priesthood fitted in its place perfectly to complete the whole structure, as it had been prepared by the Master Builder” (Joseph Fielding Smith, Doctrines of Salvation, Vol. 1, page 170).

Urim and Thummim or Seer Stone

Various sections of the Doctrine and Covenants include summaries that state revelations were given through the Urim and Thummim (Sections 3, 6, 7, 11 and 14-17).  The only problem is this is not possible as the angel took the Urim and Thummim back after the first 116 pages were lost and were never returned.  Revelations in the D&C occurred in the same manner in which the Book of Mormon was translated, by Joseph Smith placing a seer stone in a hat and burying his head in the hat to exclude the light.  This method of translating the Book of Mormon is already documented by apostle Russell M. Nelson in the July 1993 Ensign.

Another issue with this is that chapter 9 of the original Book of Commandments makes no mention of a Urim and Thummim which is the same revelation as D&C Section 10.

Below I will go through several of the major changes the LDS church has made to the revelations that prove the quotes above from Apostle John A. Widtsoe and President Joseph Fielding Smith are patently false.

The 1833, Book of Commandments Chapter 4 verse 2 states, “...and he has a gift to translate the book, and I have commanded him that he shall pretend to no other gift, for I will grant him no other gift.”

This revelation clearly states that Joseph Smith should not pretend to translate anything other than the Book of Mormon as commanded by the Lord.  The problem is Joseph Smith did not want to follow this commandment as he “pretended” to translate other books, namely, his Inspired Version of the bible and the Book of Abraham.  So by the time this revelation was written in the Doctrine and Covenants it had to be altered so that these other works of Joseph Smith could be sold as scripture.

In 1835, Doctrine and Covenants Section 5:4 severely altered this previous revelation to state, “And you have a gift to translate the plates; and this is the first gift that I bestowed upon you; and I have commanded that you should pretend to no other gift, until my purpose is fulfilled in this; for I will grant unto you no other gift until it is finished.”

Problem solved!  Instead of having revelation from God being broken by Joseph Smith, just re-write it so that it says what you want!

The 1833 Book of Commandments Chapter 7 verse 3 states, “Now this is not all, for you have another gift, which is the gift of working with the rod: behold it has told you things: behold there is no other power save God, that can cause this rod of nature, to work in your hands, for it is the work of God.”

This revelation has since been revised as the current version of this revelation in the Doctrine and Covenants states, “Now this is not all thy gift; for you have another gift, which is the gift of Aaron; behold, it has told you many things; Behold, there is no other power, save the power of God, that can cause this gift of Aaron to be with you. Therefore, doubt not, for it is the gift of God; and you shall hold it in your hands, and do marvelous works; and no power shall be able to take it away out of your hands, for it is the work of God.” (Doctrine and Covenants Section 8:6-8)

Why would the LDS church make this change from the “gift of working with the rod” to the “gift of Aaron”?  Once you know what the “rod” is the answer becomes obvious.  A divining rod is an occult item thought to be magical that is used by the superstitious to hunt for hidden items such as buried treasure.  Hunting for buried treasure is exactly what Joseph Smith did for a living with his seer stone when he was hired by Josiah Stowell as a youth.  It is also the same thing he was doing that lead to his arrest in 1826 for deceiving Josiah Stowell.

This is a complete embarrassment to the LDS church and is exactly why this revelation had to be revised so that occultist practices would not be so easy to connect to the revered prophet Joseph Smith.

Nature of God: “…for God never changes, therefore his attributes and character remain forever the same” (Lecture four, p. 51).   This contradicts a doctrine that is taught in the LDS church today that God was not always God; that he was once a man like us and had to progress to godhood.

Nature of God:  “They are the Father and the Son:  The Father being a personage of spirit…” (Lecture four, p. 53).  LDS doctrine teaches that God is not a spirit, but has a body of flesh and bones (Doctrine and Covenants 130:22).
Trinitarian view of Godhead:  “And he being the only begotten of the Father…possessing the same mind with the Father, which mind is the Holy Spirit, that bears record of the Father and the Son, and these three are one, or in other words, these three constitute the great, matchless, governing and supreme power over all things: by whom all things were created and made, that were created and made: and these three constitute the Godhead and are one:  The Father and the Son possessing the same mind, the same wisdom, the same power and fullness” (Lecture five, pp. 53-54) (spelling corrected).
Also the Q&A on pages 57-58 state the following:

“Q:  Do the Father, Son and Holy Spirit constitute the Godhead?
A: They do.”

“Q:  Does the believer in Christ Jesus, through the gift of the Spirit, become one with the Father and the Son, as the Father and Son     are one?
A:  They do.”

Alterations to these revelations and more are discussed in more detail at the following sites:  MormonThink.com and UTLM.org. 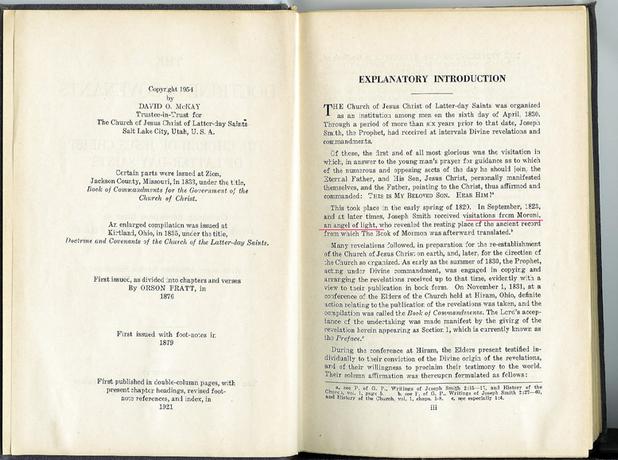 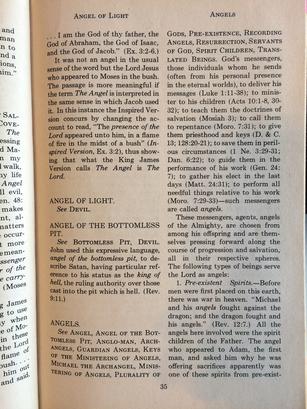