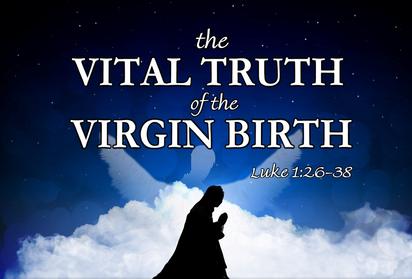 The Bible is explicitly clear the birth of Jesus by the virgin Mary was a miraculous conception from the Holy Ghost (Matthew 1:18, 20).  This is clearly a miracle because Mary asks the angel Gabriel how it is possible for her to be pregnant since she has never been with a man (Luke 1:34), not to mention the Holy Ghost is an immaterial spirit.  This is a critical doctrine within Christianity as it was prophesied by Isaiah.

Isaiah 7:14 “Therefore the Lord himself shall give you a sign; Behold, a virgin shall conceive, and bear a son, and shall call his name Immanuel.”

The conception of Jesus by the immaterial Holy Ghost and the material Mary is clearly portrayed throughout these verses.  Since this is obviously not a natural conception, it must be a miracle only God can perform through the Holy Ghost.  Because of this special and unique conception, Jesus is both fully human and fully God (John 1:14; 1 Timothy 3:16; Hebrews 2:14-17).  Additionally, Jesus was not born into sin as every other human, and therefore, did not have the nature to sin (Hebrews 7:26).  This is very important as Jesus is God incarnate, meaning God in the flesh.  Recall, the child was to be called Emmanuel, which means “God with us” (Matthew 1:23).  This is vital because only God can pay for the sins of humanity and He became a man in Jesus for this vicarious atonement (John 1:1,14; 1 Timothy 3:16, 1 Peter 3:18).

However, Mormonism clearly teaches a very different doctrine on the conception of Jesus.  The birth is not taught as a miracle, but as God (who remember, has a body of flesh and bones according to Mormonism) coming down to earth and having sexual intercourse with Mary to conceive Jesus.  The Holy Ghost has no part in the Mormon conception of Jesus.  The critical error in this teaching is Mary would no longer be a virgin, making Isaiah’s prophecy false!

Referred to as the greatest theologian the LDS church has ever had by Prophet Joseph Fielding Smith, Apostle Bruce R. McConkie was very candid and clear in the doctrine of the conception of Jesus:“God the Father is a perfected, glorified, holy Man, and immortal Personage.  And Christ was born into the world as the literal Son of this Holy Being; he was born in the same personal, real, and literal sense that any mortal son is born to a mortal father.  There is nothing figurative about his paternity; he was begotten, conceived and born in the normal and natural course of events…” (Bruce R. McConkie, Mormon Doctrine, p. 742, 1979 ed.).

When they say “in the flesh,” they are referring to God coming down in the flesh to sire Jesus with Mary.  Again, this doctrine is taught and signed in a message by the Quorum of the Twelve Apostles and First Presidency:

“He was the Firstborn of the Father, the Only Begotten Son in the flesh, the Redeemer of the world” (The Twelve Apostles and Church Presidency Testimony, “The Living Christ,” Ensign, April 2000).

"I believe firmly that Jesus Christ is the Only Begotten Son of God in the flesh…'Reorganites' claim that he was begotten of the Holy Ghost, and they make the statement that the scriptures so teach.  But they do err not understanding the scriptures.  They tell us the Book of Mormon states that Jesus was begotten of the Holy Ghost.  I challenge that statement.  The Book of Mormon teaches no such thing!  Neither does the Bible" (Joseph Fielding Smith, Doctrines of Salvation – Volume 1, pp.18-19, 1994).

Brigham Young had extensively preached on the subject of the birth of Jesus.  Here are several of his teachings from the Journal of Discourses:

“The question has been, and is often, asked, who it was that begat the Son of the Virgin Mary. The infidel world have concluded that if what the Apostles wrote about his father and mother be true, and the present marriage discipline acknowledged by Christendom be correct, then Christians must believe that God is the father of an illegitimate son, in the person of Jesus Christ! The infidel fraternity teach that to their disciples. I will tell you how it is…

When the Virgin Mary conceived the child Jesus, the Father had begotten him in his own likeness. He was not begotten by the Holy Ghost. And who is the Father? He is the first of the human family; and when he took a tabernacle, it was begotten by his Father in heaven, after the same manner as the tabernacles of Cain, Abel, and the rest of the sons and daughters of Adam and Eve; from the fruits of the earth, the first earthly tabernacles were originated by the Father, and so on in succession. I could tell you much more about this; but were I to tell you the whole truth, blasphemy would be nothing to it, in the estimation of the superstitious and over righteous of mankind. However, I have told you the truth as far as I have gone. I have heard men preach upon the divinity of Christ, and exhaust all the wisdom they possessed…

Again, they will try to tell how the divinity of Jesus is joined to his humanity, and exhaust all their mental faculties, and wind up with this profound language, as describing the soul of man, ‘it is an immaterial substance!’ What a learned idea! Jesus, our elder brother, was begotten in the flesh by the same character that was in the garden of Eden, and who is our Father in Heaven. Now, let all who may hear these doctrines, pause before they make light of them, or treat them with indifference, for they will prove their salvation or damnation.

I have given you a few leading items upon this subject, but a great deal more remains to be told. Now, remember from this time forth, and forever, that Jesus Christ was not begotten by the Holy Ghost. I will repeat a little anecdote. I was in conversation with a certain learned professor upon this subject, when I replied, to this idea—‘if the Son was begotten by the Holy Ghost, it would be very dangerous to baptize and confirm females, and give the Holy Ghost to them, lest he should beget children, to be palmed upon the Elders by the people, bringing the Elders into great difficulties’” (Brigham Young, Journal of Discourses, Volume 1 - pp. 50-51, 1852).

“The birth of the Savior was as natural as are the births of our children; it was the result of natural action. He partook of flesh and blood—was begotten of his Father, as we were of our fathers” (Brigham Young, Journal of Discourses, Volume 8 – p. 115, 1860).

“When the time came that His firstborn, the Savior, should come into the world and take a tabernacle, the Father came Himself and favored that spirit with a tabernacle instead of letting any other man do it. The Savior was begotten by the Father of His spirit, by the same Being who is the Father of our spirits, and that is all the organic difference between Jesus Christ and you and me. And a difference there is between our Father and us consists in that He has gained His exaltation, and has obtained eternal lives” (Brigham Young, Journal of Discourses, Volume 4 – p. 218, 1857).

This is one of dozens of critical differences on Jesus in Christian / Mormon doctrinal beliefs.  It begs the question, “If you believe in a false Jesus, do you have a false hope of eternal salvation?”