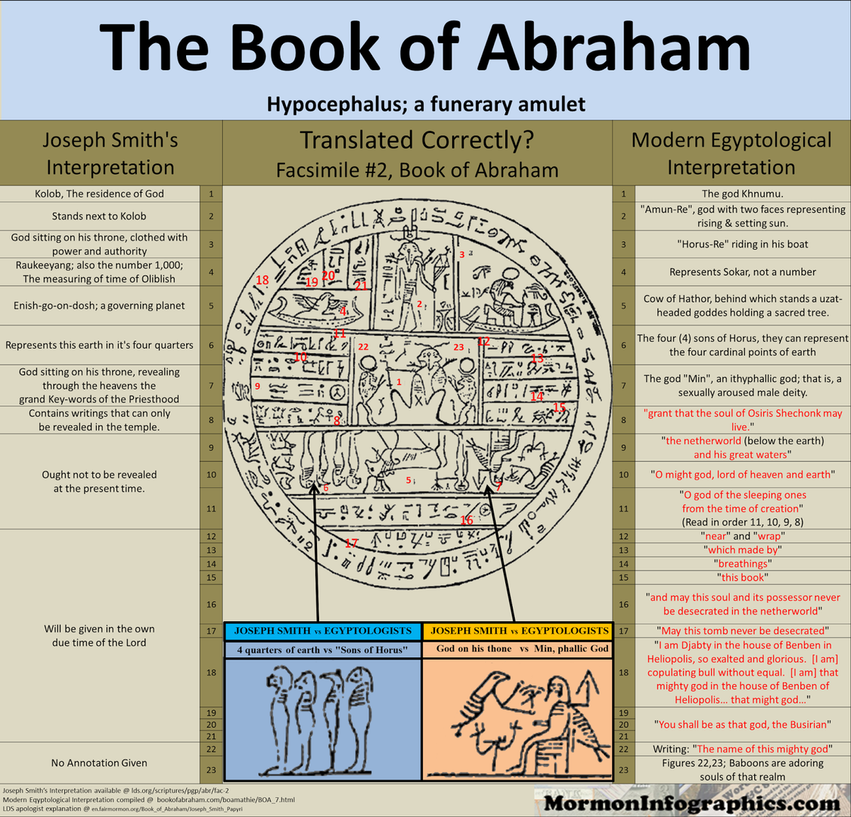 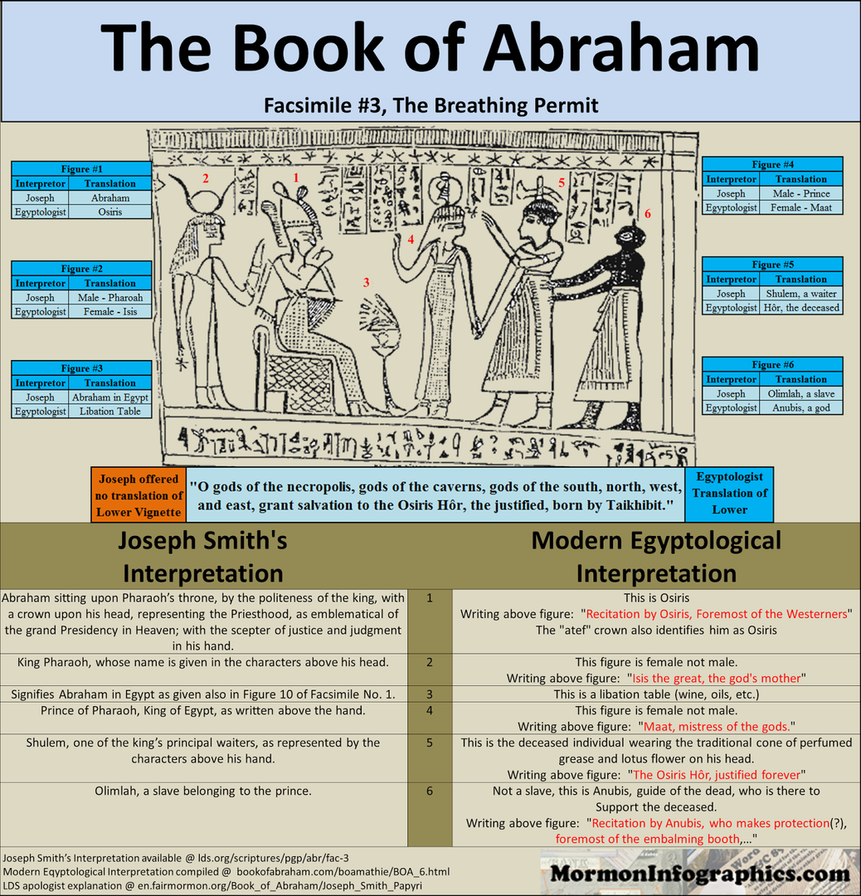 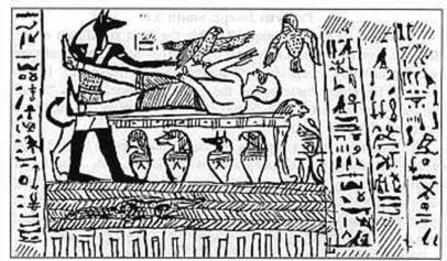 The Book of Abraham

Of all the issues with Mormonism and Joseph Smith’s claim to be a prophet, the Book of Abraham is one of the biggest and most verifiable issues facing the LDS church today.  I cannot stress enough the significance of the issues involving the translation of the Book of Abraham and what Joseph Smith claims versus what the papyri and facsimiles actually translate too.  If the translation is correct, then Joseph Smith’s prophetic claims potentially have much more weight.  But if the translation is incorrect, then the doctrines which come from the Book of Abraham such as a plurality of gods, the earth being “organized” from existing matter versus created out of nothing (ex-nihilo), the priesthood, pre-mortal existence, other inhabited worlds in the universe and Kolob (the star nearest the planet where God lives) are all false doctrines.  There should be no question to this; it’s either a correct translation and Joseph Smith is a prophet of God or it is an incorrect translation and he should be considered a false prophet.

Below is a picture of the original facsimile No. 1 and as it is published in the Book of Abraham:

Notice how the original facsimile picture is missing the head of a standing person who is holding a knife.  Joseph Smith inserts a human head on the body of what Egyptologists say should have a Jackal head on the Egyptian god Anubis.  The correct restoration of facsimile No. 1 is shown below:

The translation comparison from Mormoninfographics.com of facsimile No. 1 is shown below:

Based on the comparison of translations, Joseph Smith incorrectly translated the entire scene as Abraham was dead about 2,000 years prior to this common Egyptian funeral scene from the 1st Century.  All of the names Smith uses in the scene are wrong.  He draws a human head on what should be the Jackal god Anubis along with what looks to be a knife in his hand, which is incorrect.

Mormoninfographics.com provides an excellent comparison of how Egytptologist's translate this facsimile versus what Joseph Smith translated into Mormon scripture.

As you can plainly see, Joseph Smith is completely wrong on all sections of the funerary amulet he attempts to translate.  He misidentifies every pagan god within the facsimile.  Another major misidentification is that Egyptologist's translate figure #7 as Min, the phallic pagan god of fertility sitting on a throne with an erect penis.  However, Joseph Smith translates this scene as our Heavenly Father "sitting on his throne, revealing through the heavens the grand Key-words of the Priesthood."

The translation comparison from Mormoninfographics.com of facsimile No. 3 is shown below:

In 1871, the original papyri used in the translation were believed to be lost in the great Chicago fire.  But in 1966, they were discovered in the Metropolitan Museum in New York.  The LDS church then negotiated the acquisition of the documents in 1967.  The papyri were then handed over from LDS church leaders to Dr. Hugh Nibley, a linguist (but not and Egyptologist) at BYU, to translate.  One issue to point out here is why did the prophet at the time (David O. McKay) not translate the documents himself given he supposedly has the ability as “Prophet, Seer, and Revelator”?

Dr. Nibley never published a translation (for obvious reasons as you will see), but did publish volumes of information in church magazines seemingly designed to obfuscate that never answered the central issue of the translation.  However, Dr. Nibley did state: “We have often been asked during the past months why we did not proceed with all haste to produce a translation of the papyri the moment they came into our possession. Well, for one thing others are far better equipped to do the job than we are, and some of those early expressed a willingness to undertake it. But, more important, it is doubtful whether any translation could do as much good as harm." (Brigham Young University Studies, Spring 1968, pg. 251) (emphasis mine)

This is when the Book of Abraham became a huge issue for the LDS church as every objective and independent Egyptologist not only said the translation was incorrect, but that it was about 2,000 years off dating to the 1st century BC.  The translation turned out to be an very common Egyptian funeral text called the Book of Breathings from the Book of the Dead.  It largely consisted of a magic based pagan burial ritual designed to prepare Egyptians for the afterlife and had nothing at all to do with Abraham or anything that is in the Book of Abraham.

Mormon and non-Mormon Egyptologists are in agreement on the translation of the papyri and facsimiles since the rediscovery.  This includes translations by Mormon scholars Michael D. Rhodes (BYU) and John Gee (BYU).

Below are some comments by independent Egyptologists who have examined the papyri and/or the facsimiles:

“... I have examined the illustrations given in the 'Pearl of Great Price.' In the first place, they are copies (very badly done) of well known Egyptian subjects of which I have dozens of examples. Secondly, they are all many centuries later than Abraham... the attempts to guess a meaning for them, in the professed explanations, are too absurd to be noticed. It may be safely said that there is not one single word that is true in these explanations... None but the ignorant could possibly be imposed on by such ludicrous blunders ...” - Dr. W. M. Flinders Petrie, London University

“... It is difficult to deal seriously with Joseph Smith's impudent fraud... I need scarce say that Kolob, etc., are unknown to the Egyptian language... Smith has turned the Goddess into a king and Osiris into Abraham ...” - Dr. A. H. Sayce, Oxford, England

“... The plates contained in the 'Pearl of Great Price' are rather comical and a very poor imitation of Egyptian originals... The text of this chapter, as also the interpretation of the plates, displays an amusing ignorance. Chaldeans and Egyptians are hopelessly mixed together, although as dissimilar and remote in language, religion and locality as are today American and Chinese. In addition to which the writer knows nothing of either of them ...” - Dr. John Peters, University of Pennsylvania

“... The 'Book of Abraham,' it is hardly necessary to say, is a pure fabrication. Cuts 1 and 3 are inaccurate copies of well known scenes on funeral papyri, and cut 2 is a copy of one of the magical discs... Joseph Smith's interpretation of these cuts is a farrago of nonsense from beginning to end. Egyptian characters can now be read almost as easily as Greek, and five minutes' study in an Egyptian gallery of any museum should be enough to convince any educated man of the clumsiness of the imposture ...” - Dr. Arthur C. Mace, Asst. Curator, Metropolitan Museum of Art, New York, Dept. of Egyptian Art

These issue with the Book of Abraham has been a massive headache for the LDS church and is one of the many significant reasons why the LDS church is rapidly loosing membership in the US.  Although the church does not publicly recognize the issues, which is smart on their part because they don’t want to put a spotlight on it, they are making changes in the introduction to the Book of Abraham that try to divert attention from the “translation” issue.

In 2013, the LDS church announced hundreds of changes to the scriptures (Bible, Book of Mormon, Doctrine and Covenants and the Pearl of Great Price).  Most of these changes are insignificant punctuation or spelling issues.  However, the LDS church has attempted to hide a few major changes among the hundreds of minor changes so the major issues are not easily revealed.  The LDS church is attempting to quietly change what it has taught for over 175 years in that the Book of Abraham is no longer a direct translation from the papyri and facsimiles, but an “inspired” translation or a translation by revelation.  There are several major issues with this change in teaching.

1.  The Book of Abraham introduction claims it was “translated from the papyrus by Joseph Smith” and were “the writings of Abraham … written by his own hand, upon papyrus.”

The History of the Church penned by Joseph Smith himself says, "… with W.W. Phelps and Oliver Cowdery as scribes, I commenced the translation of some of the characters or hieroglyphics, and much to our joy found that one of the rolls contained the writings of Abraham, another the writings of Joseph of Egypt, etc., – a more full account which will appear in its place, as I proceed to examine or unfold them. Truly we can say, the Lord is beginning to reveal the abundance of peace and truth" (History of the Church, vol. 2, pg. 236).

2.  Why did Joseph Smith spend all that time creating the Egyptian alphabet and grammar?

3.  Why, if it was an “inspired” translation or translation by revelation, did Joseph Smith pay a huge sum of $2,400 dollars to acquire the papyri?

4.  Why the LDS church would not have maintained this position of an “inspired” translation or translation by revelation the entire time or at least before the rediscovery of the papyri.  If the LDS Prophet can communicate with God and is a proclaimed “Prophet, Seer, and Revelator,” why would they not have told the followers all along that it was not a direct translation?

5.  Even if this could be considered an “inspired” translation or translation by revelation, why are all the explanations of the papyri and the facsimiles not only wrong, but 2,000 years off?

Where did the Book of Abraham come from then?

According to 34 year veteran CES teacher and author of An Insider's View of Mormon Origins, Grant Palmer, 100% of the Book of Abraham motifs come directly from four sources:

The astronomy and cosmology within chapter three of the Book of Abraham reflected the scientific views of an early 19th century Copernican and Newtonian concept.  As science has progressed, new concepts have replaced old concepts.  These new concepts within Joseph Smith’s time in the early 1800’s were the growing popular scientific world beliefs of what was replacing the old Roman Catholic Ptolemaic beliefs.  Then in the 1900’s, the scientific work of Einstein has proven the Copernican and Newtonian concepts to be flawed.  This unveils some major issues with anachronisms in the Book of Abraham:

Grant Palmer concludes, “Many of the astronomical and cosmological ideas found in both Joseph Smith’s environment and in the Book of Abraham have become out of vogue, and some of these Newtonian concepts are scientific relics.  The evidence suggests that the Book of Abraham reflects concepts of Joseph Smith’s time and place rather than those of an ancient world” (Grant Palmer, An Insider's View of Mormon Origins, pp. 17-25).

What I have presented is just a high level introduction to the issues surrounding the translation.  These issues with the Book of Abraham translation and the LDS church’s evolving stance on the translation are clear evidence that Joseph Smith’s claim to be a true prophet of God, Seer and Revelator are fraudulent.

There are other objective sites that I would recommend that go into detail and lay out all the issues with the translation as well as objectively provide the arguments by not only the critics, but by the LDS church and LDS church apologists such as the analysis at MormonThink.  MormonThink.com is a site maintained by current and former Mormons who want to provide an objective look into the facts, history, scriptures, controversies and contradictions in the Mormon church.

For a well-produced video on the Book of Abraham, please visit my Videos page to play “The Lost Book of Abraham” video. Additionally, please see the first minute of the video titled“Apostle Jeffery Holland Interview on BBC Television” in the Videos section to see the Apostle’s interview with BBC television regarding the translation issue with the Book of Abraham. 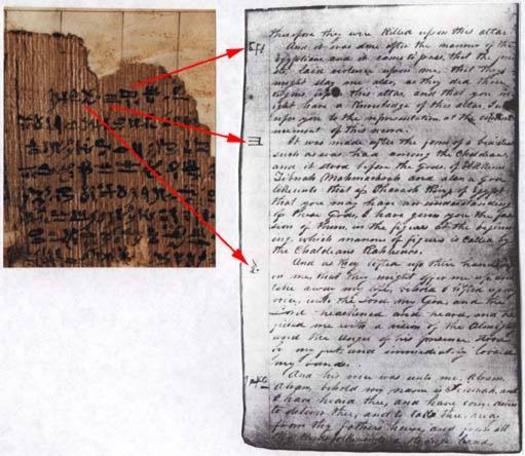 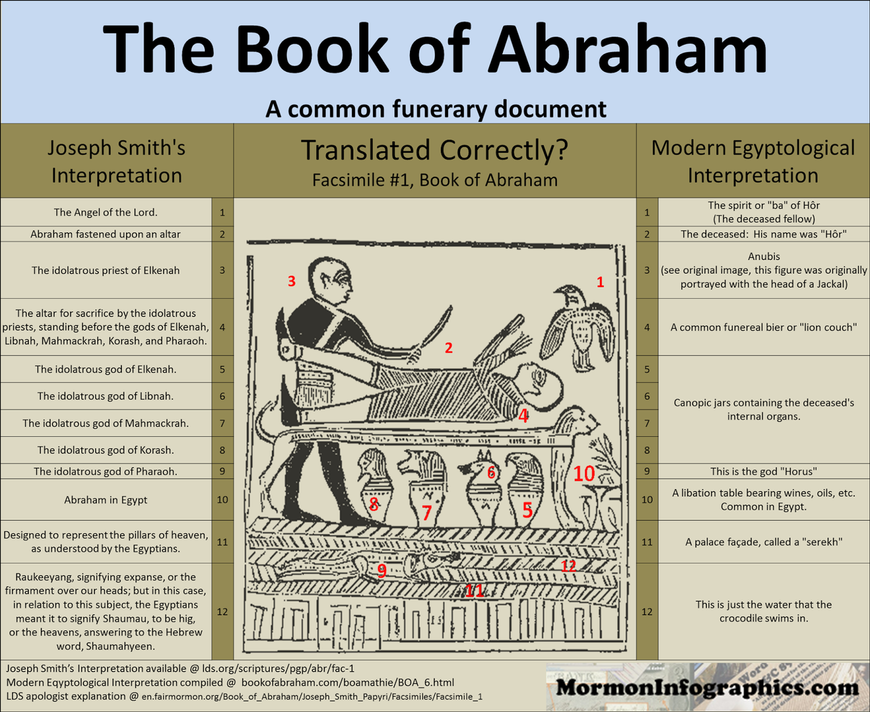