Mormons teach a total apostasy of the true church has occurred; not a partial apostasy, or a majority, but total.  Mormons will typically point to a few verses in the Bible to defend this position.

1 Timothy 4:1 “Now the Spirit speaketh expressly, that in the latter times some shall depart from the faith, giving heed to seducing spirits, and doctrines of devils;”

2 Thessalonians 2:3 “Let no man deceive you by any means: for [that day shall not come], except there come a falling away first, and that man of sin be revealed, the son of perdition;”

Amos 8:11-12 “Behold, the days come, saith the Lord GOD, that I will send a famine in the land, not a famine of bread, nor a thirst for water, but of hearing the words of the LORD: And they shall wander from sea to sea, and from the north even to the east, they shall run to and fro to seek the word of the LORD, and shall not find [it].”

These are three of the LDS missionaries favorite Bible verses to use in teaching investigators of the Mormon church biblical prophecy of a total apostasy.  A general glance at these verses does indicate an apostasy, though a careful reading clearly indicates nothing regarding a total apostasy.  1 Timothy 4:1 says some, not all, shall fall away from the faith.  2 Thessalonians 2:3 says there will be a falling away first, and the son of perdition will be revealed.  It does not say a total falling away, also, I have not seen the son of perdition nor have we seen him since the inception of the Mormon Church.

With regard to Amos 8:11-12, again, this is another verse Mormons misuse to support their doctrine of a total apostasy.  Instead of focusing in on two verses from the book of Amos without context, let's take a step back and see what Amos is describing in the chapters leading up to this point.  Amos was written in about 750 BC, which is a couple decades before the fall of the Northern Kingdom of Israel to Assyria in 722 BC.  The entire premise and purpose of the book of Amos is God's declaration of judgment on Israel through the prophet Amos unless they repent and turn from their self-righteousness and idolatry.  Over time the people of Israel have continued to seek after the desires of their hearts rather than after God.  Chapters 4-8 of Amos foretells of God's judgment and Israel's impending destruction.  In chapter 9, Amos describes the restoration of the two Kingdoms of Israel from exile/captivity and the rebuilding of the city and temple.

Additionally, if you read the verse closely, it does not describe an apostasy in the sense that the word of God is gone because it speaks to a famine of the hearing of the words of the LORD, not the availability or preaching of the words.  When you understand these people had been in self-righteousness and other sins for so long, their hearts were far from God.  Because of this, the people are so spiritually blind they do not even see or hear the words of God even when they are spoken by the prophet Amos.

Now the Bible has much to say in regards to Jesus’ word falling into total apostasy.

Psalm 100:5 “For the LORD [is] good; his mercy [is] everlasting; and his truth [endureth] to all generations.”

1 Peter 1:23-25 “Being born again, not of corruptible seed, but of incorruptible, by the word of God, which liveth and abideth for ever. For all flesh [is] as grass, and all the glory of man as the flower of grass. The grass withereth, and the flower thereof falleth away: But the word of the Lord endureth for ever. And this is the word which by the gospel is preached unto you.”

Matthew 16:18 “And I say also unto thee, That thou art Peter, and upon this rock I will build my church; and the gates of hell shall not prevail against it.”

Isaiah 40:8 “The grass withereth, the flower fadeth: but the word of our God shall stand for ever.”

All these Bible verses indicate the word of God shall stand forever.  If there were a total apostasy as Mormonism claims then God would be made a liar.

The gospel which has been perfectly preserved for us is our new covenant (for salvation) with the Lord (Hebrews 8:10-13).  A covenant is a contract and a contract is between two parties which the terms cannot be changed.  All the conditions of the contract are laid out before any party can agree.  This new covenant we have entered into with the Lord has never changed since it was made effective with His sacrifice for all humanity on the cross and will never change as it was made everlasting (Matthew 26:28, Hebrews 13:20). 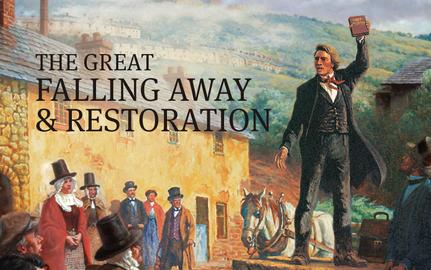