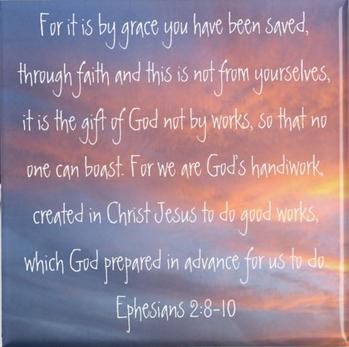 "The founders of every other major religion said, 'I'm a prophet who shows you how to find God,' but Jesus taught,
'I'm God, come to find you'" (Tim Keller, Encounters with Jesus, p. 46).

Grace is the most meaningful and significant word in Christianity and when properly understood, melts a human heart as the ultimate love of God for humanity is revealed in this single world.  There are songs sung, sermons preached and lives transformed by this word which unveils the scope not only of God’s wrath against sin, but his love for us.  As powerful and crucial as grace is to Christians, you will not often hear the word grace used in Mormon sermons, writings, or in casual conversations among Mormons.  Why?

I believe this stems from several factors including a lack of contextual Bible study and a lack of a personal relationship with the Lord.  In Mormonism, God is not really known or pursued on a personal level.  He is presented by leadership largely as a merciful God who has provided a cleansing of sin (though only temporary), which one must maintain all the laws and ordinances of the church in order to have a chance of earning grace to lay hold of eternal life.  This is essentially how grace is defined in the LDS Bible dictionary.

Mormon doctrine teaches grace is, in essence, Jesus refinancing the sin debt for you and all your good works, moral conformity, and obedience to laws and ordinances is what pays off that debt.  There is mercy, removal of the punishment, and two payments—Jesus to God on your behalf and you to Jesus on your behalf, but no real grace.  Grace is defined as receiving a free gift we do not deserve; receiving God's unmerited favor.  If I have to pay Jesus back for what he did for me, then I deserve and I earn, therefore, no grace is received.

To suggest Jesus refinanced the debt we still pay for instead of it being a free, unmerited gift which cannot be paid back completely misses the boat and is offensive to God.  Let me explain by relaying a story told by Erwin Lutzer.

“… grace has to be a free gift.  Since it is independent of works and wholly of God, it must be given without strings attached. … Paul put it this way: ‘For the wages of sin is death, but the free gift of God is eternal life in Christ Jesus our Lord’ (Romans 6:23).  Yes, it has to be a gift—unearned and undeserved—and it is too expensive to repay.

Somewhere I read a story about a missionary who became a good friend of an Indian pearl diver.  They had discussed salvation for many hours, but the Hindu could not believe that it could be a free gift.  He believed that salvation could come by walking the nine hundred miles to Delhi on his knees.  But the missionary said that salvation was so costly that Jesus had to buy it for us.

Before he left on his pilgrimage, the Indian gave the missionary the largest and most perfect pearl he had ever seen.  The pearl diver explained that his own son had lost his life in getting the pearl from the bottom of the sea.  The missionary thanked him, but then insisted that he pay for it.  The Hindu was offended, saying that there was no price that could be paid for a pearl that had cost him his son.

Then and there the truth dawned:  That is why Christians insist that no once can pay for salvation.  It cost God the death of his only Son.  To think we can pay for that is an insult indeed.  Grace is free to us but very costly to God” (Erwin Lutzer, How you can be sure that you will spend eternity with God, p. 40-41).

Tim Keller eloquently displays the nature of biblical grace and its entitlements when he writes, "When Jesus went to the cross, he took upon himself the punishment for sins that we deserved and that he didn't.  That is what has historically been called his 'passive' work: He received the penalty for our disobedience to God’s law.  As a result, we who believe in Jesus are free from any condemnation for those sins.  But if this is all he had done for us, we might be grateful that we will not be punished for things we have done in the past.  We might be supremely relieved that God won’t be angry with us anymore.  But we still wouldn't have the evidence that he actually loves us, for just because a father is not punishing his son doesn't mean he’s delighted with him.  And so if you believed only in Jesus' passive work, you might still feel under a great deal of pressure and fear that you were not truly 'right with God' and could still lose God’s favor if you slipped up.  You could know you were pardoned, but you certainly could not be assured that you were loved.

But passively absorbing the punishment is not all Jesus did for us.  During his entire life, and preeminently here at his death, he also fulfilled the positive demands of the law of God as well, which has been called his 'active' work.  Jesus not only died the death we should have died in order to take the law's curse for us, he also lived the great life of love and fidelity we should have lived in order to earn God's blessing for us.  No one ever loved God with his entire soul, mind, and strength—no one ever loved his neighbor with perfect, full, sacrificial love—except Jesus.  What does a life like that deserve?  It deserves God’s highest blessing, praise, and honor.  It deserves God's full love and delight.  And because Jesus not only fulfilled the law of God passively but actively—in our place, as our substitute—it means not only that he got the penalty that we deserved, we get the reward from God that he deserved...

If Jesus had died only the death I should have died, then if I wanted to be sure that the Father not only pardoned me but loved me deeply and fully, I would rightly feel it was up to me to live a morally heroic life.  My sins would be forgiven, but God's positive regard of me otherwise would be completely dependent on how well I was living…When we believe in him, we do not just get the benefits of his death.  It’s not just that our sins are forgiven, but we also get the benefits of his obedience.  That means his righteousness is credited to us …, as well as his sacrifice.  In 2 Corinthians 5:21, it says: 'God made him who had no sin to be sin for us, so that we might become the righteousness of God in him.'  When we believe in Jesus Christ, we are seen as righteous.  We are seen as obeying.  We are seen in our Advocate.  We are seen to be doing as well as Jesus did, not just dying as well as Jesus died" (Tim Keller, Encounters with Jesus, pp. 158-9, 164-5).

As a Mormon, I believed only in the passive work of Jesus as I was under significant pressure to tip the scales in my favor through my morality and personal righteousness.  I hoped at the final judgment my good outweighed my bad and Jesus would cover the rest.  I infinitely underestimated power and love of the biblical Jesus in believing he was essentially a janitor to come and clean up for me what I could not.

The motivations for my works were inherently selfish (not selfless) to earn my way and not because of the free gift of grace God offered through trusting alone in Christ’s finished work.  I was just like the Pharisees who did wonderful works and maintained the highest morals to earn the favor of God.  I was proud of the things I was doing as a member of the Mormon church.  As I look back, I can now see with clarity how my motivations for my works and morality were building my pride and self-righteousness, pushing me further away from God and his grace as I had subconsciously become my own savior.  I was unwittingly rejecting the perfect work of Jesus in favor of my own selfish works.  I was "giving to get" or earn blessings from God when all along God’s gift of grace was right there freely being offered through transferring my trust in my works to Jesus' finished work on the cross.

Only when you let go of your attempts at meriting God's favor can your heart be changed and transformed.  You will have the liberty, peace and rest that your eternal life is secure in his finished work on the cross and not dependent on your works.  Your motivations can then be pure, driven by the selfless love and rich grace which has been freely bestowed upon you.  Ephesians 2:8-10 says:

In analyzing the text we can see we are saved by grace though faith, not works.  Why?  Because if it were based on faith and/or works, then it is no longer a gift, but something earned, which gives us reason to boast and no longer requires grace.  When we are saved by grace through faith alone, we become a new creature, created in Christ Jesus to do (not because of) good works.  This definition of salvation is a constant theme throughout the entire Bible.  The Mormon definition of salvation in their 3rd Article of Faith does not even contain the word grace nor any resemblance of its meaning:

"We believe that through the Atonement of Christ, all mankind may be saved, by obedience to the laws and ordinances of the Gospel."

Without this vitally important doctrine of biblical grace, the Mormon church is in a position to keep its followers far from liberty, peace and rest in Christ, and enslaved by the yoke and bondage of the law (Galatians 5:1).  Without biblical grace, you are exposed to control and manipulation because you will always be burdened with the requirement of earning grace through morality and obedience to laws and ordinances.  You are taught doctrines like if you don't pay your tithing you will be burned at Christ’s second coming.  The leadership instills conformity to the requirements by using these teachings in a fear, guilt and shame-based manner.  You will never know if you have earned the grace of God in this life.  Where is the freedom, peace and rest Christ promises us in this message of Mormon grace?