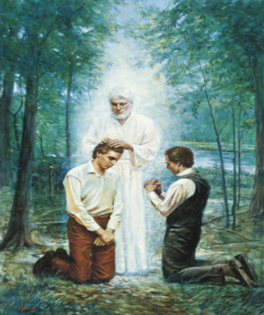 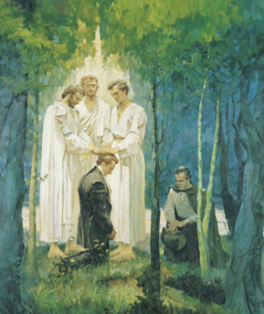 Mormonism claims once the twelve Apostles died, all authority to maintain the church died with them.  So Joseph Smith claims the two priesthoods, the Aaronic and Melchizedek, were restored to him bringing the true church of Jesus out of apostasy. The only problem with this is the gospel indicates nothing was in need of restoration.  The Bible declares the power and authority of Jesus Christ was given to Him and was never removed from the earth because He is in us always, even to the end of the world (Matthew 28:18-20).

The book of Hebrews was written to the Jews who did not believe the atoning sacrifice of Jesus was enough to save them.  You have to remember they had spent hundreds of years under the Mosaic Laws and the old covenant and are now transitioning to a new covenant.  They felt they needed to combine the old covenant and laws such as animal sacrifices along with placing their faith in Christ.  They were not placing their confidence completely in Christ to be saved (Hebrews 3:14).  They had their concerns because Jesus was not from the tribe of priests (Levi) or the family of priests (Aaron).

The Bible presents the lineage, ordination, and duties of the Aaronic Priesthood in a radically different method than what the Mormon Church presents.  First and foremost, one must be of the tribe of Levi and family of Aaron to be hold the Aaronic Priesthood (Exodus 28:1; Numbers 16:40, 18:7; Hebrews 7:5). Virtually all Mormons who are given their patriarchal blessing are from the tribe of Ephraim or Manasseh, so the lineage is unbiblical.  Additionally, this priesthood is inherited by rite of family lineage and not received by just any eligible male via ordination.  Joseph Smith recognized this in p. 319 of the book Teachings of the Prophet Joseph Smith where he said, “The Levitical priesthood is forever hereditary—fixed on the head of Aaron and his sons forever, and was in active operation down to Zacharias the father of John.”  Likewise, Doctrine and Covenants 107:13 states, “The second priesthood is called the Priesthood of Aaron, because it was conferred upon Aaron and his seed, throughout all their generations”.  However, Joseph Smith designed a loop-hole so being literal descendants was not a requirement in 107:14-16.  The Bible does not allow for such loop-holes as Mosaic Law prohibited anyone not of the proper lineage would be subject to death by violation of the Levite domain in any way.

The original ordination method in the Bible is also different in the fact that the sons of Aaron were to go through a seven day consecration period, blood from a sacrificed animal placed on their right ear, right thumb, and right big toe (Leviticus 8:22-23).  The Mormon conformation to the Aaronic Priesthood is just by laying on of the hands.

The duties of the Levitical priest are also very different from what is practiced in Mormonism as well (Leviticus 4-10).

Also, when the Apostles and disciples were sent out to spread the gospel, the King James Version uses the term they were “ordained” as if to grant special authority (many are in Acts, Titus, and 1 & 2 Timothy).  However, the Greek text does not support this translation.  Other translations more accurately translate this and use the word "appointed" or "called" (by way of election) in the New Testament.  So the Mormon view of having some special authority by way of ordination is not in any way based on an accurate representation of the original Greek word used in the New Testament.

At the time when the KJV was translated in 1611, Europe was still virtually all Catholic with its religion, teachings and practices.  So all the best translators for the KJV were Catholic, which is why it is just a slightly revised version of the Bishops’ Bible from 1602.  It is easy to see why Catholic dogma has slipped into the KJV given the group translation was subjective in nature and was done in a period near the peak of corruption in the Catholic Church.

The Aaronic Priesthood was used in a completely different manner with respect to the temple, sacrifices, and priests in the Old Testament versus Mormonism’s use of the priesthood.  These were all part of the Mosaic Covenant, which was a temporary covenant between God and Israel.  This priesthood served its purpose and was a “shadow of heavenly things” (Hebrews 8:5), but again was temporary and made obsolete by a more perfect High Priest after the order of Melchizedek (a type or foreshadow of Christ), who is the mediator of our new covenant (Hebrews 7:11-28).

Hebrews 7:11-12 “If therefore perfection were by the Levitical priesthood, (for under it the people received the law,) what further need [was there] that another priest should rise after the order of Melchisedec, and not be called after the order of Aaron? For the priesthood being changed, there is made of necessity a change also of the law.”

God is telling us if perfection could come by way of the Levitical priesthood, why would we need a priest out of a different order?  The first issue with the Levitical priesthood is it is associated with the Law of Moses.  Secondly, Jesus was not of the correct tribe and could not be a priest according to Mosaic Law.  So if Jesus is to be our High Priest forever (Hebrews 7:21), He must come from a different, more superior tribe as Psalm 110:4 prophesied because the term of a Levitical priest is limited to one’s life.

Psalm 110:4 “The LORD hath sworn, and will not repent, Thou [art] a priest for ever after the order of Melchizedek.”

So why does this priesthood not need to be restored?  Remember, the main role of the High Priest was to offer up sins for himself first, then for the people (Hebrews 7:28).  The law makes men high priests who have weaknesses, but the word of the oath, which was after the law, appoints Jesus as our perfect High Priest who has been perfected forever (Hebrews 7:29).  Jesus was appointed as a High Priest to offer gifts (eternal life with Him) and sacrifice for sin (his atonement for our acceptance by God).  Jesus’ sacrifice was the perfect sacrifice as He was sinless and spot-free meeting the holy standards of God as a sacrifice for sin.  Jesus as our High Priest continues forever even after His ascension into heaven (Hebrews 6:19-20).

In the Old Testament there was only one high priest at a time and his main role was to offer gifts and sacrifices for sins by the blood of bulls and goats once a year in the holy of holies (Hebrews 5:1, Exodus 30:10).  One of the major issues with Old Testament animal sacrifice is it did not take away the sin, it only covered the sin.  Now we are under this new and everlasting covenant in Christ, who has made Himself a perfect sacrifice once and for all, which takes away all sin for all-time casting them into the depths of the sea (Micah 7:19).

In Hebrews 10:16-18, The Lord promises this new covenant will be written in our hearts and minds.  This means there will be an inner transformation occuring within the true believer.  He then promises us complete and total forgiveness or our sins and remembers then no more (Hebrews 10:17).  Now since our sins are completely forgiven there is no more need for offering for sin (Hebrews 10:12).  This new covenant truly is infinitely better than the old!

Jesus came to restore this shattered mirror and transform us from the inside out and He was victorious in the areas Adam failed.  We could never fix this mirror through our efforts and deeds as we can never attain the perfect righteousness required.  Just as Adam’s sin brought death into the world spreading to all, Christ’s sinless, righteous life and sacrifice brings life (righteousness) to all who believe (Romans 5:12,19; 1 Corinthians 15:21-22) restoring the mirror which was once shattered reconciling our direct access and fellowship with God.

When Jesus died on the cross for us the Bible says the veil in the temple was torn in two from top to bottom.  Before the veil was torn, the Priests were the mediators between God and man, but now since the veil has been torn everyone who believes in Christ now has direct access to God (1 Timothy 2:5).  Unfortunately for Mormons, they do not see this as they still have a veil in their temple which continues their separation from God.

When a Christian places his faith in Christ it does not give them license to sin or else it would not be real faith (Romans 6:1,15).  Hebrews 10:26-29 gives warning to those who willfully sin after having received the knowledge of truth, the sacrifice for sins is no longer in effect.  This means if we sin by dismissing the work Jesus did on the cross as being sufficient for all sin we have trampled Christ under our feet and His sacrifice is no longer effective for us.

The Bible clearly presents Jesus as forever our High Priest, author and finisher of our faith.  The book of Hebrews proclaims many limited Levitical Priesthood holders were exchanged for a perfect single High Priest after the order of Melchizedek in Jesus Christ.  He is our High Priest and just like the Levitical priests He made a sacrifice for sin.  This sacrifice was made once for all (Hebrews 9:12) and has redeemed us from the righteous wrath of God which the world was under.

1 Peter 2:9 states, “But ye [are] a chosen generation, a royal priesthood, an holy nation, a peculiar people; that ye should shew forth the praises of him who hath called you out of darkness into his marvellous light:” The chosen generation was once Israel's alone, but the title they once held is now held by every Christian as we are all priests to offer spiritual sacrifices to the Lord.

Where do you get your Authority?

The Mormon response to a Christian will be something to the effect of “where do you get your authority from?”  My simple response to this is “by the word of Jesus.”

Jesus said in Matthew 28:18-20, “And Jesus came and spake unto them, saying, All power is given unto me in heaven and in earth. Go ye therefore, and teach all nations, baptizing them in the name of the Father, and of the Son, and of the Holy Ghost: Teaching them to observe all things whatsoever I have commanded you: and, lo, I am with you alway, even unto the end of the world. Amen.”

Hebrews 1:3 says about Jesus, “Who being the brightness of his glory, and the express image of his person, and upholding all things by the word of his power, when he had by himself purged our sins, sat down on the right hand of the Majesty on high;”

All things are sustained by the word of Jesus so whatever He commands happens.  So saying one must have some special authority only available through the laying on of the hands by proper authority is completely unbiblical and suggests Jesus’ word does not hold all authority and power.